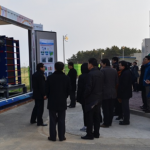 The OTEC team of Korea Research Institute of Ships & Ocean Engineering (KRISO) affiliated with Korea Institute of Ocean Science and Technology (KIOST) had successfully finished 20kW OTEC pilot plant public demonstration.
The 20kW OTEC pilot plant which is a down-scaled model of 1MW OTEC plant was designed in detail based on R-32 by the Korean OTEC team which consists of 13 national institutes and universities in the end of 2012. After manufacturing unit parts, all parts were gathered and fabricated in the early of October 2013.
A public demonstration was held after multiple successful runs with a safe operation routine. All national institutes and universities participated in making the 20kW OTEC plant. 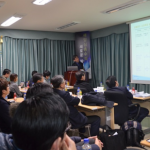 Also OTEC experts from other organizations gathered together to evaluate and review the performance of the 20kW OTEC plant on December 24, 2013. The OTEC team of KRISO has been working on a national project called ‘Development of utilization technology of deep ocean water energy’ since 2010. Based on the success of the 20kW OTEC plant operation in 2013, the team is planning to achieve another success of building and operating a 200kW OTEC plant in 2014. The final goal of the project is to obtain technologies to design a 1MW OTEC plant by 2015.