Ocean Thermal Energy Conversion (OTEC) is a marine renewable energy technology that harnesses the solar energy absorbed by the oceans to generate electric power. The sun’s heat warms the surface water a lot more than the deep ocean water, which creates the ocean’s naturally available temperature gradient, or thermal energy. 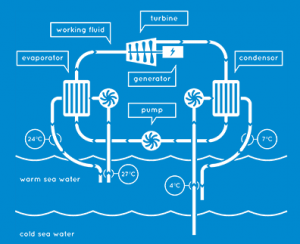 OTEC uses the ocean’s warm surface water with a temperature of around 25°C (77°F) to vaporize a working fluid, which has a low-boiling point, such as ammonia. The vapor expands and spins a turbine coupled to a generator to produce electricity. The vapor is then cooled by seawater that has been pumped from the deeper ocean layer, where the temperature is about 5°C (41°F). That condenses the working fluid back into a liquid, so it can be reused. This is a continuous electricity generating cycle.
The efficiency of the cycle is strongly determined by the temperature differential. The bigger the temperature difference, the higher the efficiency. The technology is therefore viable primarily in equatorial areas where the year-round temperature differential is at least 20 degrees Celsius or 36 degrees Fahrenheit. 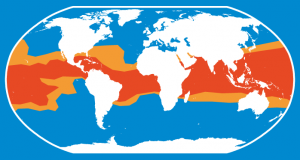 The oceans cover more than 70% of Earth’s surface and capture a large part of the sun’s heat in the upper layers, making them the world’s largest solar collectors and energy storage system. Utilizing just a small portion of this energy, can cover the global energy need.
The energy source of OTEC is free, available abundantly and is continually being replenished as long as the sun shines and the natural ocean currents exist. Various renowned parties estimate the amount of energy that can be practically harvested to be in the order of 3 to 5 terawatts (1 terawatt is 1012 watts) of baseload power generation, without affecting the temperature of the ocean or the world’s environment. That’s about twice the global electricity demand. The oceans are thus a vast renewable resource, with the potential to contribute to the future energy mix offering a sustainable electricity production method.
The technology is viable primarily in equatorial areas where the year-round temperature differential is at least 20°C (36°F).

The distinctive feature of OTEC is the potential to provide baseload electricity, which means day and night (24/7) and year-round. This is a big advantage for for instance tropical islands that typically has a small electricity network, not capable of handling a lot of intermittent power.


Next to producing electricity, OTEC also offers the possibility of co-generating other synergistic products, like fresh water, nutrients for enhanced fish farming and seawater cooled greenhouses enabling food production in arid regions. Last but not least, the cold water can be used in building air-conditioning systems. Energy savings of up to 90% can be realized.
The vast baseload OTEC resource could help many tropical and subtropical (remote) regions to become more energy self-sufficient.