The French island La Réunion is to receive €150m funding to deploy a seawater cooling project to power its air-conditioning,  announced Monday, October 27.
The project will involve the construction and operation of a system to draw cold water at 5°C from a depth of 1,000m from the Indian Ocean and supply public and private facilities on the 2,500km² island. These include the regional hospital, university and the industrial and commercial areas of the island’s capital Saint Denis, and adjacent town of Saint Mary and the island’s airport. 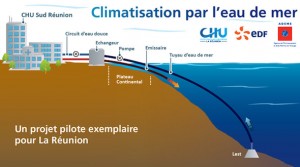 The system is expected to produce 40MW cooling and help save 75% electricity compared to traditional air conditioning systems. The project of 150 million euros (90 million funded) should be completed by 2017. Three to four hundred jobs will be created through this project, which will begin next year. Much of this labor is notably in charge of digging 23 kilometers of trenches needed for the burial of pipelines (including 7 km will be used to deliver seawater to the coast and 1 km to the discarded at sea after use). The project offers significant economic perspectives on an island with more than 135,000 unemployed. La Réunion aspires to become energy self-sufficient by 2025 and has enormous potential for renewable energy production.
Sources:
– Cooling Post
– L’energie D’avancer